What comes after an earthquake 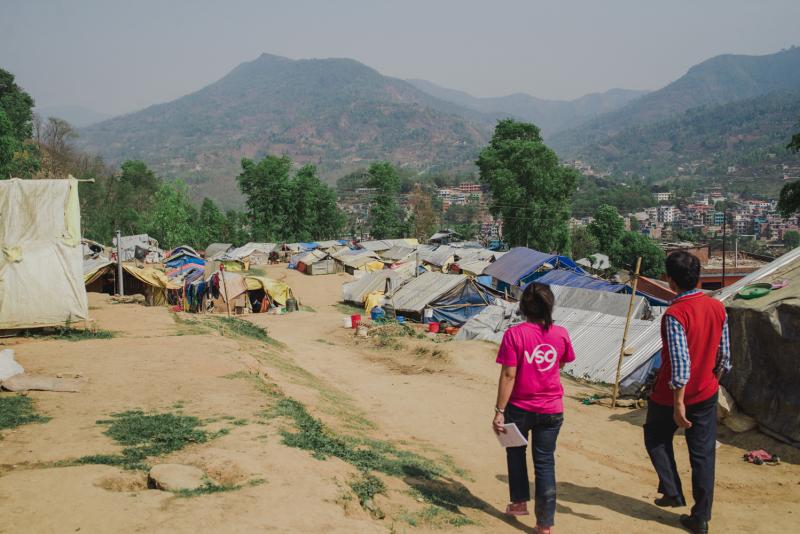 In April 2015, a catastrophic 7.8 magnitude earthquake rocked Nepal, taking over 9,000 lives and leaving millions homeless. Surviving a natural disaster was not what Jessica Stanford, 34, expected when she began her volunteer placement as a Business Development Advisor on alternative energies with VSO in 2014.

Refusing to be evacuated, Jessica has stayed to help her friends and colleagues rebuild Nepal even in the face of rippling aftershocks. Now she’s based in Sindulpalchowk, the hardest-hit district. She's collecting data to map the shelter needs of villagers ahead of the monsoon season.

An earthquake is confusing, disorientating and terrifying. During the first one, we couldn’t stand, we couldn’t walk. In the second quake, I was working with my government counterpart in the fourth floor of the building. People were screaming. We hunkered down. Being so many floors up was not pleasant.

Things changed dramatically for me after the quake, especially in terms of work.

I didn’t question whether I should stay because there was so much to be done. I was already here, I had basic language training and I knew how the government worked.

How could I be back at home with food, water and power, when I knew others were still sleeping in the open - hungry and vulnerable and at risk from further quakes and landslides?

I came to Nepal for two years to share my skills and experience. What is needed right now has changed slightly, but the sentiment behind my support has not.

In the first two weeks, I was involved with a wide range of volunteer activities. I just wanted to be useful. I wanted to make sure that I was working as hard as I could because so many people required support. It was within the ethos of VSO too; to be using my skills to benefit Nepal.

So I dished out food and I gave people blankets. Before the big aid agencies got here, the Nepali youth were amazing.  I worked with them.

Now I work with Save The Children and the Office of District Development Committee on the shelter issue. It’s about compiling official, verified data for the district in terms of deaths, injuries and houses that are partially or fully destroyed.

There are so many stories that will stick with me.

A woman I work with has been tirelessly running needs assessments in rural districts. She’s always got a smile, but I just learnt that she lost her mother, sister and sister-in-law. To go through such a massive personal upheaval and be such a leading light for the aid efforts was humbling.

Last week, I spent the whole day in a village entertaining some children. One grandmother was looking after four children because they lost their parents and kept inviting me to her home for food. The amazing Nepali hospitality and spirit hasn’t been lost, even though they don’t actually have a house to bring me to.

The day after the earthquake struck I went to see the UNESCO site Patan Durbar Square. It was rubble. Thinking about how I had taken my friends there just the day before the quake brought it all home to me.

I was lucky. I was in a safe space. No-one I know personally was killed. But I know people who lost six family members in that one instance.

Every aftershock still makes me jump. I still get that tight feeling; is your building going to fall down? Is somebody somewhere being affected? Your stress levels never quite go back to normal.

I can’t conceive going back to what I was doing before Nepal. The idea of sitting somewhere and not giving all I can give is unbearable.

I have seen that volunteering is a huge help in situations like this, particularly in the first few days. I have witnessed firsthand the amazing energy, courage, hard work and enthusiasm of countless Nepali volunteers, particularly youth, who are passionate to be part of the solution.

Communities have to help each other. Volunteers can inspire others to take part. There’s so much to be done and it can’t all be paid for. The only way reconstruction of this scale can happen is through volunteering.

Leaving now would be the worst thing that VSO could do. I plan to continue raising awareness of the needs and the reality beyond the initial bubble of media interest and the humanitarian aid window.

I’m in Nepal for the long haul and I wouldn’t be anywhere else in the world right now.

Find out about volunteering in Nepal